I can't stand it!! More scientific proof that pasture raised animals are better for your health!


“Omega-6 is like a fat producing bomb...”
So said French researcher Gerard Ailhaud, commenting on the results of a new study showing that mice fed the amount of omega-6 fatty acids present in the modern western diet grow fatter and fatter with each succeeding generation. In the picture shown, the mouse on the left was raised on the high levels of omega-6 fatty acids and low levels of omega-3 fatty acids typical of the American diet. In addition to being grossly overweight, it has the warning signs of diabetes. The healthy mouse on the right was raised on standard mouse chow. The two mice got equal amounts of exercise. The mice are the fourth generation to be raised on the two types of diet. 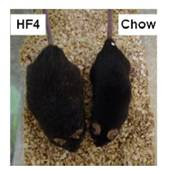 Omega-6 fatty acids are essential for health, but the amount consumed by most Americans increases the risk of obesity, diabetes, inflammatory diseases, and cancer. Omega-6s are most abundant in vegetable oils such as corn oil, safflower oil, and cottonseed oils. (Olive oil is low in omega- 6 fatty acids.) Few people realize that grain-fed animals are also a major source of omega-6s. Meat and dairy products from animals fed a high-grain diet, which is the typical feedlot diet, have up to ten times more omega-6s than products from animals raised on their natural diet of pasture.
This study suggests that if we switch to food with a healthy balance of omega-6 and omega-3 fatty acids, we will be leaner and healthier, and so will our children, grandchildren, and great grandchildren.

Many people have assumed that a lower fat milk is better for them but Eatwild.com reports a study published in the May issue of The Journal of Clinical Nutrition said that full-fat milk is actually better for you as long as it is grassfed. The Journal said that the more grassfed full-fat dairy products people consume the lower their risk of heart attacks will be. This is because 100 percent grassfed dairy products have up to five times more conjugated linoleic acid (CLA) than conventional dairy products. In this study of 3500 people, those with the highest levels of CLA stored in their body tissues had a 50 percent lower risk of heat attack than those with the lowest levels of CLA. The CLA level in milk is lowered by the feeding of even small amounts of grain so consumers should always specify 100 percent grassfed milk products.

Smit, Liesbeth A, Ana Baylin, and Hannia Campos. 2010. Conjugated linoleic acid in adipose tissue and risk of myocardial infarction. The American Journal of Clinical Nutrition. Published ahead of print, May 12, 2010.
Posted by Seevers Family at 6:16 AM No comments:

OK fellow raw milk drinkers, help me out with this one.  I had two jars of Jenny Johnson's grass-fed raw milk from back on May 6th that we never drank. I left it on the shelf in the garage figuring I'd feed it to the farm cats sometime. We never got around to that and pretty soon it started to separate or "clabber".  I've heard of clabbering milk for a week or so but what is this that we have three months later? I brought the jars inside to pour down the drain today and discovered this most interesting site.  The top layer is gold, dense and greasy, just like butter. As I opened the jar I was braced for a horrible smell but surprisingly it was mild and pleasant.  I actually stuck my finger in it for a taste and it is VERY sour, but not foul or putrid.  The smell reminds me of kefir.

The second layer is pure whey. But after all these months can I strain it off and use this whey? Is this the fluid that the pioneer women used to preserve and ferment?

The bottom layer is what has me stumped. Is this cottage cheese curds? Is it milk solids? And again, after all these months, can it be used for anything? Fats rises to the top, protein sinks to the bottom?

Gosh, for anyone who ever asks, "how long does raw milk last?".....just depends on what you want to use it for.  I sure wouldn't try this with a carton of milk from the grocery store! 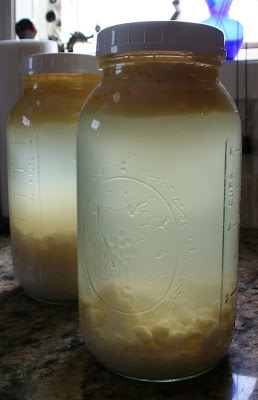 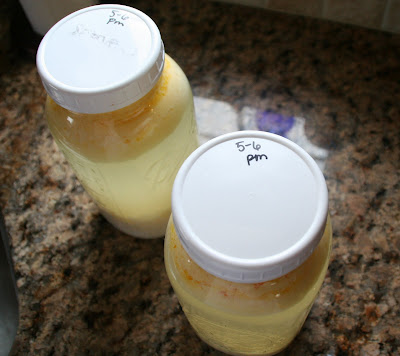 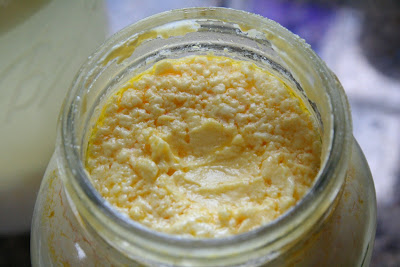 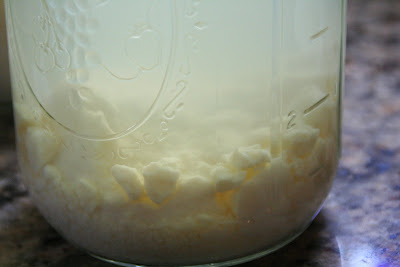